Over the past two decades, occupational licensing requirements have increased dramatically. In their study Too Much License? A Closer Look at Occupational Licensing and Economic Mobility, Professors Edward Timmons and Brian Meehan with Researchers Andrew Meehanand John Hazenstab examine the relationship between increases in occupational licensing requirements and economic mobility. As Jared Meyer put it in The Washington Examiner, “The results are astounding.”

Summarizing their findings in an op-ed for The Hill, Professors Meehan and Timmons conclude, “As policy makers consider ways to address income inequality and decreases in economic mobility, the costs of occupational licensing must be considered.”

Read the Full Study: Too Much License?

Conrad Hilton left his hometown of San Antonio, New Mexico at the age of 31 to buy a bank in Texas—oil country. But after Hilton found a bank to purchase in Cisco, the owner raised the price at the last minute. Refusing to buy the bank, Hilton headed to a local, run-down hotel to spend the night. After seeing all of the traffic at the hotel, Hilton inquired about buying it instead. That hotel, The Mobley, would be the first in an expansive business empire than spans the globe today. Advisory Board member Gary Hoover brings us the story of Conrad Hilton’s life and legacy.

Conrad Hilton: The Dreamer Who Conquered an Industry Nebraska: A National Leader in Job Licensing Reform
The Platte Institute’s Adam Weinberg details how Nebraska recently joined the ranks of a growing number of states that have adopted comprehensive occupational licensing reforms. Supply or Demand? What’s the Story behind Men Leaving the Labor Force?
Using new infographics based on extensive research, Michael Farren and Scott Winship highlight a main cause of decline in male labor force participation — men voluntarily leaving the workforce. Occupational Licensing Linked to Less Economic Mobility
In a recent Forbes column, Adam Millsap discusses the findings and implications of the latest Archbridge study on occupational licensing and economic mobility, Too Much License? In a lecture given at Princeton University, Stanford economist Raj Chetty discusses the role of neighborhood effects in his new study “Race and Economic Opportunity in the United States: An Intergenerational Perspective.” Following the lecture, comments are provided by Harvard Sociologist William Julius Wilson and University of Chicago Economist James Heckman.

I hope you enjoyed this latest edition of the Insider and reading about the findings and impact of our recent study linking economic mobility to occupational licensing. I think the authors did a great job in highlighting the urgency of occupational licensing reform to rekindle the American Dream.

I’m sure Conrad Hilton encountered many barriers like occupational licensing on his way to achieve his American Dream and build his hotel empire. His road wasn’t easy, and I’m sure it wasn’t easy for our Advisor Gary Hoover to summarize Hilton’s amazing life. I really enjoyed the 10 rules for living from Hilton’s autobiography. 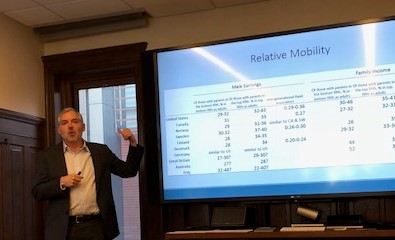 Last week, I had the pleasure of seeing Archbridge Honorary Advisor Scott Winship present his research on Economic Mobility in America to a group of scholars and Ph.D. students led by Economists Steven Durlauf and Nobel Laureate James Heckman at the Center for the Economics of Human Development at the University of Chicago. It was an enlightening experience, not in the least because of Professors Durlauf’s and Heckman’s contributions to the discussion. Recently, Professor Heckman participated (starting at the 1:26:00 mark) in an event at PrincetonUniversity discussing the findings of Raj Chetty’s lastest study.